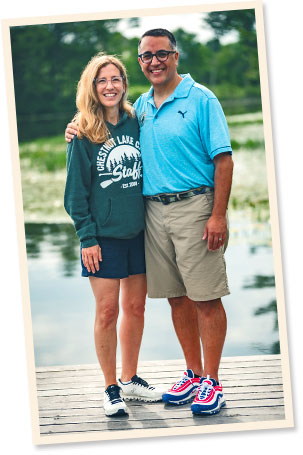 Growing up in Philadelphia, Aaron and Ann attended different summer camps from a young age. While their summers were spent on various campuses in the Pocono Mountains of Pennsylvania, their shared passion for time spent among friends, role models, and the traditions found at their respective camps is what has inspired their careers as camp leaders and why coming to Chestnut Lake Camp as owners/directors in 2020 is the fulfillment of a dream.

In 21 years as a professional at Pinemere Camp in Bartonsville, PA, ANN SELKOW established herself as one of the most beloved leaders in the camp's storied history. Hired by Aaron in 2000 as the camp's year-round Business Manager, Ann's high-level skills were critical to Pinemere's success year after year.

After attending Penn State University and later earning her master's degree in education from Saint Joseph's University in Philadelphia, Ann shifted after a start in teaching and coaching to significant positions in administration and management. It was after Aaron assumed the role of Executive Director at Pinemere and the Selkows considered starting a family that Ann accepted the opportunity to make camping her career. During her long tenure at Pinemere, Ann has taken on new roles each year working with three different camp directors. She has overseen various aspects of the overnight camp's operations (including business and finance, dining and health services, enrollment, and other critical areas), mentored countless staff members, and built strong relationships with thousands of families. Ann has earned a reputation throughout the field as a professional of extraordinary integrity, resourcefulness, and care.

After attending Connecticut College and beginning his career (like Ann) in the classroom and as a coach, AARON SELKOW was hired in 1994 to succeed legendary Pinemere Camp director, Bob Miner. Until 2008, Aaron led Pinemere – his own camp as a child – through a period of growth for the institution and for himself as a professional. Aaron departed Pinemere to build skills and experiences and became vice president of Program Services at JCC Association and the director of the Merrin Center for Teen Services (where he led the JCC movement's camps, oversaw the Merrin Fellowship for young professionals, and managed some of the agency's largest program areas such as the JCC Maccabi Games.)

In 2011, Aaron was ready to return to camp, and assuming the role of director at the Union for Reform Judaism's (URJ) Camp Harlam in Kunkletown, PA was a chance to build upon a strong foundation and ensure long-term sustainability for the camp. In 2017, he assumed the role of executive director with an expanded portfolio that helped Harlam to grow and develop in enrollment, fundraising efforts, family engagement, staff culture, and organizational innovation. This included the opening of the first URJ-affiliated community day camp in 2014, the establishment of a renowned system of support for the well-being of campers and staff, and the introduction of various new models and approaches that have been replicated in the field.

After stepping down at Harlam, Aaron was appointed to a new role at the URJ as deputy director for the URJ's 15 overnight camps and on his first day in the position, he began leading the largest system of nonprofit Jewish camps in North America through their response to COVID-19. His work contributed to the URJ's decision to cancel all planned in-person summer programs on April 30, 2020, likely a tipping point for many in the field. In May of 2020, the URJ's critical financial challenges led to the elimination of Aaron's position and created an opportunity for Aaron and Ann to further their efforts to find a summer home together once again in the field.

Aaron and Ann arrive at Chestnut Lake Camp ready to help it to continue its amazing growth while they sink their roots deep into the soil of CLC in Beach Lake, PA.

Aaron and Ann have a daughter, Lily, whose devotion to camp is unparalleled. Except in comparison to their rescue dog, Apollo. He's a pretty massive camp fan. The Selkows live in the Overbrook Farms section of Philadelphia, PA.