I started as a camp director in 1994. It was a camp that had been open for 75 years by that point and had a rich history. Later in my career, I ran a camp that was 60 years old, similarly established, and entrenched in traditions that had withstood the test of time. I’ve worked as a consultant with many camps that were even older. But I also have opened camps, supported newer camps, and now – with such honor – I relish the chance to work with Ann here, at Chestnut, where we are still at the earlier stages of our development into a camp that will be around forever.

What makes a “forever” camp? How do you know that a camp is even beginning to reach that stage when what you’re seeing throughout the summer is something that’s going to be truly sustainable? Lots of ways. Too many to share in a short post that is about our weekly Campfire. But there were two things that happened at (and before) the Campfire this week that represent a special element of Chestnut that has already been built and is anchored in our identity, and another that is evidence of new growth.

Our sister camp, Trail’s End, started Chestnut 15 years ago. In doing so, they allowed Chestnut to borrow from many decades of proven success to give our new camp a head start. Many of the elements of Chestnut that our campers have come to enjoy were derivative of something at Trail’s End. One such program was the “Community Service Award.” It continues to be representative of what Chestnut is all about, and last night was an example of why.

Throughout the week, Head Counselors make “nominations” available for campers and staff members to present a case for someone they know to be selected for a Community Service Award. A special 4″x4″ round patch that has the recognition stitched into it is handed to the recipients after the nomination is read by the person or persons that selected them. Last night, a stream of campers from many Divisions stood before our camp family and shared beautiful perspectives on how others had helped them, befriended them, listened to them, celebrated them, comforted them, and cared for them. The words were honest and powerful; the Head Counselors shared that they had many more nominations than they could choose for the Campfire, so we will have more recognition to tackle throughout the rest of our Session. When campers applaud and yell to support their friends that are being distinguished for doing great things, your camp is on its way towards forever status.

The next measurable example of growth started the night before the Campfire. As you all know, we are approaching the start of our Tribal War (Color War) between the Unami Turtles and Minsi Wolves. In the last few days – with only about one week left in the Session – the campers have started to ask when our Tribal Break will come. It is an eternal question. So, too, are, “Who will the Chiefs be?” and “When will you be announcing the Chiefs?” (Note: “Chiefs” are the male/female staff members that are chosen to lead each team – it is considered a coveted honor). Our camp leaders come up with countless ways to answer without divulging anything. But in the past, there does come an inevitable point at Chestnut Lake when the community (or at least some of its sharp members) realize that the Break of Tribal must be happening tonight. They notice that we might be at an all-camp program, they pick up signals that something off-beat or surprising will be happening, and although there is still a great deal of excitement when we announce the start of our favorite program and read the names of each Chief, once the Break begins, everyone knows what’s next. That is where a “Fake Break” comes in.

We do not like to lie to children. And we are all about kindness at Chestnut. But a bit of trickery and fanfare can go a long way to building suspense and excitement about an already-special event. That is what we did on Thursday night. And then we did it again on Friday (at the Campfire). 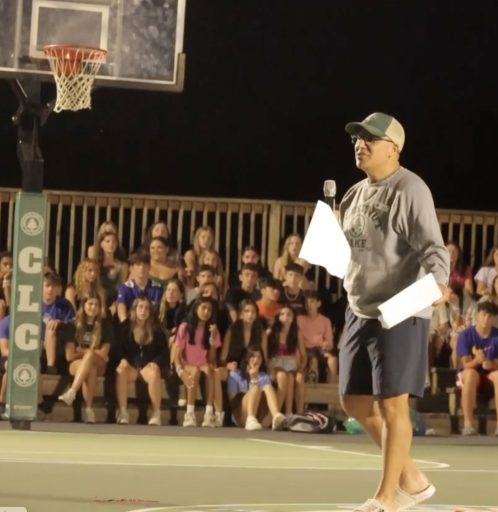 As we ended an awesome all-camp Lip Sync Battle, we turned off the lights in the Basketball Stadium and fireworks started to stream from behind in the woods. Music started blaring, and I walked with a bright orange bag in my hands to center court. Anyone at camp before knew that this was the Tribal Break and in my hands was the list of Chiefs, and any new camper jumped right in so that they, too, could claim to know what was going on. I calmed everyone down, removed the envelope from the bag, and with a bit of flair, announced a Fake Break. A moment of devastation was followed by minutes of joy. A surprise. More suspense. A bigger deal. It’s what we needed. And it is the mark of a forever camp.

At our Friday night Campfire, we did it again. A bit more subtly (which made it so much more believable as a real Break) but no less effective. The only thing better than one Fake Break is two Fake Breaks. That’s what forever camps do.  And that is what we can do at Chestnut Lake.