The fourth week of camp got off to a great start as everyone welcomed the new campers. That night, we held one of the funniest activities at CLC: the Dutch Auction. Campers meet at the hockey pavilion where they are given special instructions for the activity. To start, they are given a set amount of time to return to their bunks and fill one laundry bag with as many random items as possible. When the campers can go, they leave the hockey pavilion faster than parents on Visiting Day! Once they return, they are given many scenarios to act out utilizing whatever they have in their bag. Scenarios include how Curtis should have proposed to Niki, best Let It Go impression, best Division Leader impersonation and best superhero outfit. 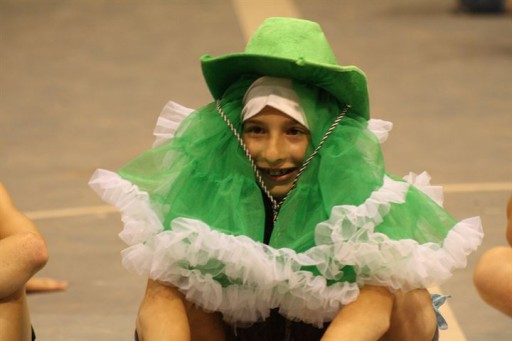 Dutch Auction was followed a couple nights later by another one of the funniest activities, The Hypnotist. Everyone gathered on the cookout slope to listen to the hypnotist’s power of persuasion. After explaining how hypnotism works, everyone followed along with some basic relaxation exercises. Next, several staff members were selected to go on stage to participate in the show. Staff members quickly found themselves relaxing to the point of sleep, primed for hilarious suggestions from the hypnotist. One of the suggestions included watching an imaginary tv, surfing the channels, going between comedies, sad dramas and scary movies. Some of the other suggestions included driving a bus over curvy roads, trying to get the attention of the ice cream truck that produces the best ice cream in the world and Twitter’s $1,000,000 selfie contest. The authentic reactions of the staff kept everyone amazed and laughing the whole time.

What a great way to start second session!