Every summer, Lou and Sue Flego visit Chestnut Lake Summer Camp for one of the campers’ favorite traditions: Square Dancing! Younger campers learn simple calls like “Up to the middle with a tap, tap, tap.” while returning campers perfect calls like “Step to an ocean wave.” For two days, the campers practice in their 8-person sets, preparing for the competition on the final night. 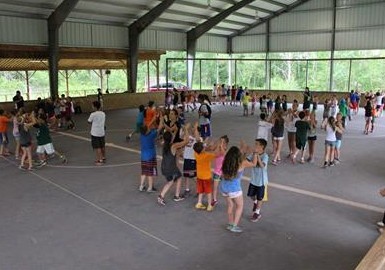 Once the squares are set, the girls take over and coordinate what each set will wear. The build-up to the final competition is pretty intense. The championship bracelets that the winners receive are highly coveted at Chestnut Lake Camp. The campers show up for the final competition decked out in coordinating outfits…there is plenty of plaid and pigtails!

Before the competition begins, Sue lightens the mood with some line dancing. Staff and campers join in as they slide and turn to “Popcorn” and “Montego Bay.” Once the line dancing is finished, the sets form their squares and prepare for the dance-off. Counselors take their spots outside of the squares, cheering on their campers and coaching them through the difficult calls. Lou, Sue, Debbi and Paul judge the squares and ask the sets that miss calls to sit down. After a while, there are only two sets left. Lou pauses to congratulate the final two squares and then moves them to the center.

As the music starts back up, all of the campers and counselors cheer the final sets on as they concentrate on executing each and every call. After the calls become more and more difficult, Lou finally has one of the sets sit down, which means that the only square still standing has won the special Lou & Sue bracelets! 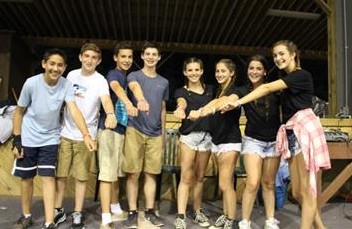 Square Dancing with Lou and Sue is a favorite Summer Camp Tradition at Chestnut Lake!